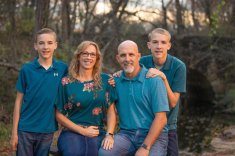 Stewart Schepers was born and raised in Canada. He trusted Christ as his personal Saviour as a teenager while attending a youth camp. After the Lord called Brother Schepers into the ministry, he moved to Oklahoma and attended Oklahoma Baptist College. It was there that he met his wife, Donna. Donna was raised in a pastor's home. She was saved as a young lady and faithfully served in her father's church. They were married in July of 1995, and upon graduation went to work as an assistant pastor to Dr. Bill Jackson of Victory Baptist Church in Wichita Falls, Texas before they moved back to Canada.

In 1991, as a student in Bible college during their missions conference week, God burdened Brother Schepers' heart about the spiritual need in the Dominican Republic.

He dismissed what God was saying to him then, because his heart and mind were set on going back to Canada. Brother Schepers started Lighthouse Baptist Church in Alliston, Ontario and pastored it for several years. Many souls were saved and matured in their faith under his leadership.

After going some time without “the peace of God ruling in his heart,” Brother Stewart surrendered to God’s calling on his life to go to the Dominican Republic in 2008, where he and his family faithfully served for 14 years.

In 2021 the Lord called Brother Stewart back to the United States as a church planter. Brother Stewart is currently working in a ministry to the Spanish speaking people in Ada Baptist Temple in Oklahoma, and continues working with another missionary in the Dominican Republic as the work there carries on.