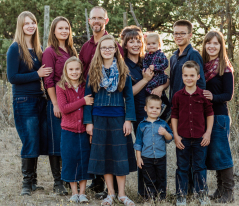 Brother Will and his wife Cindy were sent out of Pembina Valley Baptist Church and have been ministering to the Mennonites in Mexico since April 2010. Both grew up in a Mennonite home and can therefore relate very well to the people they are trying to reach with the Gospel. Brother Klassen has since taken over the Bible Baptisten Gemeinde and the church has been continually growing. The Klassens have nine wonderful children.