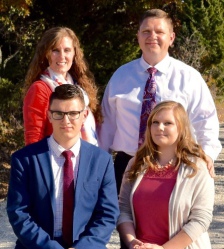 Marco grew up in Calgary, Alberta, the youngest child of an Argentine mother and Uruguayan father. As a result of his parent’s upbringing, he grew up speaking Spanish as his first language. He trusted Christ as his Saviour at an early age and surrendered to preach in 2002. In 2006, he surrendered to serve in full-time missions. God called him specifically to Uruguay in 2013 at a missions conference. Marco has since completed his Bachelor of Theology degree in missions at Canadian Baptist Bible College.

Tricia was born into a home where God was not known, but accepted Christ as her Saviour in 1998. It was Marco himself, whom the Lord used to lead Tricia to Himself. They were married the following year. In 2001, Tricia surrendered to full-time service and has also since then attended Canadian Baptist Bible College.

In 2009 the Paulichen family had the privilege of traveling to South America. They had already surrendered to serve the Lord in full-time missions in 2006, but were not yet sure of the exact country. While in South America they visited approximately 30 churches seeking the Lord’s will for their family. The Lord confirmed to them that they were in the field of the Lord’s choosing. They were especially struck with the lack of churches in the interior of Uruguay. It was shortly after that their family began to pray about a specific location the Lord laid on their hearts—the city of Salto. They moved to Uruguay in the fall of 2018 and are exicitied to be ministering to souls in Salto.