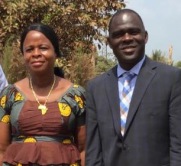 Kerdoe and Leamon Dwanyen joined CanAmera in 2019. Brother Dwanyen accepted Jesus Christ as Saviour at the age of 14 when he was convicted of his sin after hearing a message about Christ and His salvation. After serving the Lord as a youth leader for 13 years, a pastor for 19 years, and a Bible college teacher for 13 years, the Holy Spirit impressed upon his heart to go to the mission field to win more souls. Currently, he is pastoring Tappeh Baptist Church in Tappita and has started numerous other churches in the surrounding area. Besides all these responsibilities, Brother Dwanyen also runs a Bible college.

Eric and Rose Barlea came on board with CanAmera Baptist Missions International in December of 2012.

Brother Eric trusted Christ as His personal Saviour in 1980 and was called to full-time service in 1997. He attended Ghana Baptist Theological Institute and graduated in June of 2001. Brother Eric loves the Lord and has a heart for his people in Liberia. He pastors Military Baptist Church and oversees two Christian schools which he started. Brother Barlea also serves in others ministries including Liberty Radio and Blessed Hope Baptist College. Over the years, the Lord has used Brother Barlea to see many souls saved, baptized and join the church. 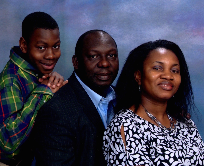 Brother Gbendah and his wife, both natives of Liberia, joined CanAmera in 2010 and it has been wonderful to see how the Lord has been using this family to reach the lost in Liberia. Brother Gbendah grew up in a Christian home and trusted Christ as his personal Saviour in 1978 at a youth camp. Growing up, he sensed the calling of God upon his life to serve Him as a missionary. In December of 1990, he fled the ravages of the deadly civil war in Liberia and moved to the Ivory Coast where he served as a pastor of an independent Baptist Church. In 1998, the Lord brought the Gbendahs to the United States where he attended and graduated from Crown College in Tennessee. Upon graduation, he returned to Liberia and has been in the ministry for sixteen years as a pastor and missionary. He currently pastors Temple Baptist Church in Liberia and was one of the key people in the establishment of the Independent Baptist Bible College where he teaches and trains nationals. He also established the Temple Baptist Church planting ministry where he focuses on recruiting Bible college students that are called into the ministry and assisting them in starting churches. The Gbendah’s have five children. 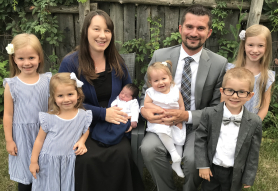 Benjamin and Jackie Reimer have been serving the Lord in Liberia, West Africa since July 2016. Since arriving in Liberia, they have worked to gain a greater understanding of the Liberian culture, and have become more proficient in “Liberian English.” Soon after arriving in Liberia, Benjamin was asked to serve as the interim pastor for Temple Baptist Church, located just outside of Monrovia, Liberia. Over time, the Lord opened the door for Benjamin to serve as the pastor of the church, which he has done since Spring of 2019. The church is seeing both spiritual and numerical growth, and has experienced the work of the Lord in growing His church through souls being saved, a number of baptisms as well as new members added. We are praying for and preparing the church for a future that includes Temple Baptist Church becoming completely indigenous. Besides the work at Temple Baptist Church, God has also given Benjamin the opportunity to teach over 30 students in a Bible college year-round, he has organized and overseen the distribution of more than 40,000 pieces of Gospel literature, and he is actively working on evangelistic and discipleship tools designed specifically for the Liberian culture and language. Jackie is the number one supporter of her husband in the ministry, and cares for the needs of their home and five young children — Amelia, Caitlyn, Levi, Bethany and Emmalyn.

Carolynn Sharp was raised in a Christian home and saved at the age of five. She attended a Christian school from grades five through twelve and then continued her studies at the Bible Institute where her father taught. The Lord called her to full-time missions during her high school junior year. The Lord also confirmed her childhood desire to become a nurse to be part of His plan for her. After Bible college, she received the training in the area of nursing, including studies in tropical diseases, operating room nursing, hospital work and traumatic events.

Carolynn spent the first twenty years of her missionary career in a medical ministry in Brazil. In 2002, the Lord allowed her to see a ministry in Liberia and not long thereafter, He confirmed a change of ministry.  Carolynn was invovled in sharing the Gospel in Liberia, and also as the clinic training coordinator and consultant in the area of clinic organization, administration and resources for that ministry. She also worked with a pregnancy crisis center, which opened in July of 2008 after realizing that the generation that was raised during the civil war was brought up with confused morals and philosophies of life, and lacking biblical principles.

In 2015 Carolynn began to transistion her overseas missionary career of over thirty-five years and relocated to British Columbia. She is involved in discipleship studies with ladies and a ladies missionary fellowship. Carolynn continues to minister in Liberia by taking regular trips there to bring supplies and training materials, as well as spending time in counseling, training, and visiting various areas.

At the age of twelve, Brother Demey's father, a Baptist Preacher, preached a semon on Hell. He was so moved by the message that he went up during the alter call and invited Christ into his life as his Lord and personal Saviour.

It was in the Church Planting course at Bible college that the Lord called him into ministry to be a church planter.

Brother Demey is currently involved in many ministries including:

-  Ministries to the Muslims